Bess Rutledge was once the greatest breeder of champion Standard Poodles in America. Now, at seventy, she has abandoned her lifelong dream of winning Best in Show at Westminster — a feat she never actually tried. She has razed her famous Umpawaug Kennels and sold off all her remaining dogs except the aging champion McCreery.

She meets Benny Neusner, a 13 year-old boy who wants a dog more than anything in the world — as long as it’s not a poodle. Benny spends his days dreaming up ways to impress his neglectful mother and avoid work at the special school he attends. He just knows if he could win Westminster, the world’s greatest dog show, he would finally make his mother proud.

Benny falls in love with McCreery, Bess’ has-been champion Standard Poodle, and dreams the old dog could win Westminster. Benny thinks if Bess coaches him, and he takes McCreery into the ring, the old champion will win. Bess’ estranged son David agrees, and so does Bess’ twin sister Mona. They also believe if Bess can finally make it to Westminster, it will bring their family back together again. If no one else can convince Bess to get back in the game, maybe McCreery’s last puppy, the beautiful Breaker, will tempt her. But is it too late? Can a crotchety old woman and a lonely boy who has never succeeded at anything combine their dreams, heal two families and achieve an ending at Westminster that is almost perfect?

An Audible Books version of ALMOST PERFECT is now available! Click here to purchase!
Up to 100% of the author’s profits will be donated to charities helping children and animals.

LIFE IMITATING ART! Click Here to View Galleries of Photos
That Could Have Been Lifted From My Novel, ALMOST PERFECT! 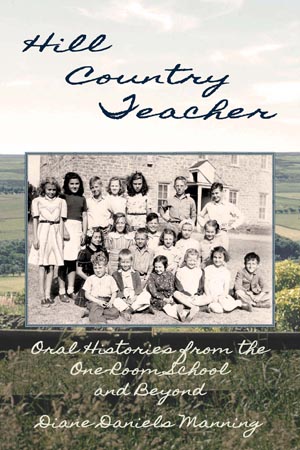 Hill Country Teacher: Memories from the One-Room Schoolhouse and Beyond

“HILL COUNTRY TEACHER vividly reminds us of how far teachers have come from a time when they had no rights and no voice — and how much they have lost through the bureaucratization of education. These teachers have a rich story to tell.”
– Albert Shanker
President, American Federation of teachers

“Oral histories spanning fifty years chronicle … the roles of eight teachers who began their teaching careers as teenagers in one-room school houses under severe social restrictions. They grew up with the profession, becoming pioneers in combining marriage and eaching, in special education, and in school integration.”
– Polly Welts Kaufman
Author of WOMEN TEACHERS AND THE FRONTIER

BUT WE MADE IT! tells the story in their own words of Texas teachers whose careers spanned the 1920s to the 1970s. These decades produced major changes in the ways Americans lived, worked, and thought about themselves, and expanded opportunities for women and minorities to pursue happiness freely and equally. Thirteen rare oral histories of a Texas generation no longer able to speak for themselves reveal they made their own quiet contributions:

“The supervisor was coming and wanted to see me. He was very frank about it. “You have these separate schools, and you’ve got to cut that out. Immediately you are to integrate your Mexicans and white children. You have a little more time for the colored.”
— Read Morgan

“People forget that Texas was settled so much later than the eastern United States … Texas was really the place to pioneer. You know what I missed more than anything else when I first went out there to teach? Iced tea! No ice on the Divide, no electricity, too far out to buy ice. We finally got a kerosene icebox, and that was heaven to have ice and ice cream.”
— Helen Hall Moffett